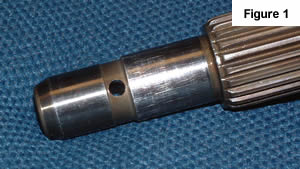 Part One of a Two-Part Series

For several years, technicians have been trying to solve the mysterious cold stall issue in vehicles equipped with Mercedes 722.6 transmissions. When the problem was first identified, it was thought to be associated with aftermarket components. At that time, no one had seen the problem in a vehicle that still had only original equipment. For that reason, most early efforts to solve this cold stall problem were focused on the replacement friction material that was used in the rebuild process. Every conceivable kind of friction material with both smooth and grooved surfaces was tried, and most had some limited successes. Rebuilders would use the friction material that seemed to work the best for them, but no material proved to be fool proof.

As things turned out, the aftermarket was not alone in the struggle. The OEM friction material choice evolved during this same period, and even for them, nothing proved 100% successful. When technicians started seeing vehicles with nothing but original equipment experiencing the same cold stall condition, they turned their focus toward wear issues.

Technicians began to identify worn seals, worn bores, and cross leak issues. The first seals to come under scrutiny were the TCC piston seals. The OEM seals were loose fitting and the aftermarket responded with snugger, better fitting seals. Many of the early shudder issues were fixed by just replacing these seals, but some issues still remained. These unresolved issues made technicians look further into the TCC apply circuit.

The Mercedes 722.6 converter uses a clutch pack to provide TCC clamping force and a three (3) path converter oil circuit. One path is for converter charge oil to enter the converter and another is for lube oil to exit the converter. The third circuit is used to provide TCC apply oil pressure during lockup or to allow apply circuit oil pressure to exhaust when the TCC is released. The apply oil travels through the input shaft and exits between the smaller and larger diameters of the smooth areas at the end of the shaft (Figure 1).

One mating surface is the larger diameter of the input shaft and it measured .660". The other mating surface, the cover tower bore diameter, measured .683". The bore diameter of a good OEM tower measures .662". The difference between the .002" factory intended clearance and the .021" clearance of the worn bore pictured here resulted in a 7.5 gallon per minute (GPM) leak, not to mention both cold stall and TCC shudder issues. This issue was resolved by removing the O-ring/lathe cut seal, blocking the lube bypass passage, and installing a radial lip seal (Figure 3).

Continuing downstream in the TCC apply circuit, the next area for a possible leak or cross leak is the turbine (input) shaft sealing rings. Art Landeck from Consumer Transmission in Poughkeepsie, N.Y., reports fixing the cold stall conditions in two different vehicles by replacing the early model, dark gray scarf cut turbine shaft rings with the late model, tan interlock rings. The first vehicle was an ML430 that came to Art's shop with a gear-train issue. After the repair was completed, the vehicle would stall the engine on cold start-up in either forward or reverse. After replacing several valve bodies and solenoids, the problem was unchanged. Art pulled the unit and replaced the stator support and installed the late model turbine shaft rings. This solved the problem. The second vehicle was an E320 AWD with 70,000 miles on the odometer. This vehicle's only complaint was a cold stall. To verify the fix of the first vehicle, Art only replaced the turbine shaft sealing rings with the late model rings.

If you follow the TCC apply circuit all the way to the valve body, you will find several valves that have a potential to leak or cross leak: the main pressure regulator valve, the TCC damper valve, and the TCC control valve (Mercedes calls this valve the torque converter lockup clutch control valve.) All three of these valves deserve close scrutiny. ATSG's Wayne Colona recently wrote an article about how bore wear at the lubrication pressure regulator valve will cause higher than normal charge pressure (722.6/ NAG 1, Transmission Digest January 2010). Now you can add a fourth valve to your inspection routine.

Searching for the Root Cause

Wayne Russell of Russell Auto Inc. in Manchester, N.H., had a rare opportunity to find the root cause of the cold stall problem.

When the C230 arrived at Wayne's shop, the first change that was made was to replace the lockup solenoid. The second change was to install the first of two rebuilt valve bodies he would eventually try. On the third day the unit was pulled for the first time. The stator support was inspected and found to be in perfect condition, the turbine shaft sealing rings were replaced with the newest version, and the torque converter was replaced with a special unit built by Rick Morris at Professional Converters in Marcy, N.Y. The converter had the latest clutches, and a radial lip seal was added where the input shaft is inserted into the cover tower (zero leakage).

On the fourth day the TCC control valve was blocked in the TCC release position. The next change was to bypass the cooler lines and cooler. Special fittings were made and the cooler lines were looped so the fluid flowed out of one cooler fitting and back into the other.

Up to this point there had been no change to the cold stall condition. Wayne wanted a test to verify if cross leak oil was applying the TCC piston. With Bob Warnke's help, Wayne tapped into the exhaust passage at the TCC control valve and routed a hose from that passage to the outside of the transmission case. With the valve in the release position, this circuit is directly connected to the TCC apply oil circuit (Figure 4).

A steady stream of fluid would prove that the TCC piston was being hydraulically applied by cross leak oil. No steady stream of oil flowed out of the hose, so the test did not prove what was expected, but one very important piece of information was learned.

As fate would have it, the clear plastic hose that exited the transmission was run vertically upwards. This made the hose act like a stand pipe and, when the engine was started, the fluid rose about one foot up the tube and stayed at that position. This information proved to be critical.

To understand this problem you need to remember two characteristics about the 722.6 TCC design. In a typical single TCC piston setup, oil behind the piston holds the piston off the cover when it is in TCC release. In the 722.6 clutch pack system, apply oil is routed between the cover and the piston on its way to applying the clutch. So first, remember that oil behind the piston, in this case, is for TCC apply. Second, remember that there is no dedicated release oil pressure sent in to keep the clutch from dragging. Release is accomplished by exhausting the apply circuit, allowing TCC charge oil pressure to move the piston to the release position, squeezing the apply oil out of the cavity between the piston and the cover. 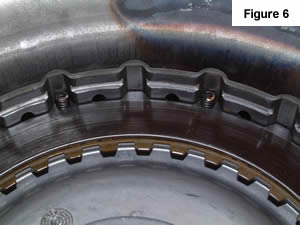 The oil rise in the exhaust circuit tube showed that there was a pressure rise in the TCC apply circuit when the engine was started. More specifically, it showed that there was residual oil trapped behind the piston and, when the engine was started, centrifugal force was causing the piston to apply (as well as pushing oil further up the tube.) If there was no residual oil trapped behind the piston, the problem would not exist. Lacking any viable check ball or hydraulic option to purge the residual oil, a mechanical option tried. The middle steel plate in the clutch pack was modified by notching 10 of the 20 O.D. lugs to allow for spring clearance (Figure 5).

Ten springs were then added to serve as piston return springs (Figure 6) and Taa—Daaaaaa THE VEHICLE WORKED PERFECTLY!

This repair has since been done on other 722.6 converters and most customers have reported that their vehicles have never worked as well. All of the tugging, dragging feeling that was accepted as normal was gone. Even the chugging on down shift was no longer felt.