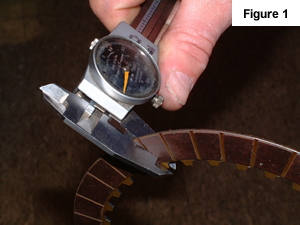 In last month's article, technicians found that centrifugal force acting on oil trapped between the TCC piston and cover in the 722.6 converters was applying the clutch on cold start up. They also learned that the cold stall issue could be eliminated by forcing the oil out of the cavity between the piston and cover. Finding the root cause of the cold stall issue - and the subsequent fix - solved many other customer complaints and symptoms, including downshift shudders and tugging sensations.

Several other customer complaints and symptoms also are related to the same problem of oil becoming trapped between the piston and the cover. Brendan Patten at Jasper Engines & Transmissions in Willow Springs, Mo., was seeking the cause of complaints involving several Sprinter vans. Symptoms varied from flares on upshifts to vibrations around 15 MPH (especially noticeable on slow U-turns) and to shrieking noises coming from the transmission pan.

The noises proved to be caused by restricted filters, and were eliminated when the filters were replaced.

The upshift flares were monitored on a scan tool, revealing that the TCC slip was increasing as much as 500RPM on each shift. The TCC solenoid was then checked to determine whether it was being turned off or modulated during the shifts. The Solenoid remained on during all of the shift cycles. These diagnostics ultimately pointed to the integrity of the TCC apply circuit or to the converter itself.

When the converter was inspected, excessive wear was found on the TCC frictions. The clutches did not visibly show the wear, but on the frictions it measured as much as .040" per clutch (Figure 1). 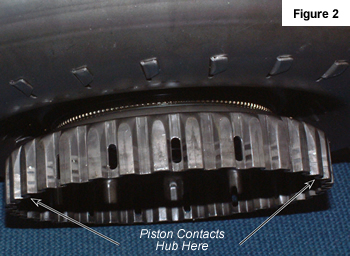 This created extra clearance that allowed the TCC piston to come into contact with the clutch hub, reducing TCC clamping force (Figure 2).

The vibrations caused by the TCC dragging at low speeds also contributed to excessive clutch wear. This wear was allowing TCC slip, felt in this case as flares on the upshifts. The material that was worn from the TCC frictions was responsible for restricting the transmission filters.

In short, all three Sprinter issues ultimately lead to the same TCC concerns.

Although many of the mysteries surrounding the 722.6 converters were being cleared up, a few questions remained. The main one was: If the oil trapped between the piston and cover was causing the cold stall issue, why did installing different clutches seem to solve the problem in some units?

It helps to understand what's going on if we compare what's happening with the TCC apply piston to what happens to a disc brake system with a defective or out-of-adjustment wheel bearing. When a disc brake is working properly, there is a minimal amount of clearance between the brake pad in its released position and the brake rotor. In this position, the brake is ready for immediate apply. If the bearings which the rotor rides on become damaged, worn or out-of-adjustment, however, the rotor will not run true. Any wobble of the rotor creates extra clearance between the rotor and brake pad as the pad and corresponding piston are forced away from the rotor. This extra clearance will cause the brake pedal to travel further and possibly need to be pumped to complete the brake apply.