When a torque converter fails, the results are quite often catastrophic. It may be difficult to determine which component failed first and even more difficult to determine the root cause of the failure. Each failure should be viewed as an opportunity to learn, and a failure that is caught before the catastrophic stage should be viewed as a golden opportunity.

Here are three converter failures that were caught in the early stages. The customer complaint on all three converters was a noise. The noise was qualified by determining when it occurred. The noise wasn’t audible in neutral or park, but could be heard in all drive ranges, forward and reverse. The noise also increased with the load that was placed on the converter.

The first converter was a 4R100. It was replaced a few weeks prior to the noise issue, while the customer was on a trip, and the distance to the original shop prevented the customer from returning the vehicle. The local technician checking out the noise felt that it was inside the converter because it was present only when the transmission was in gear. He also eliminated the transmission as the source of the noise because the noise was audible when the vehicle wasn’t moving. When the converter was removed, the overall height and endplay were checked before the converter was cut apart. Both checked within OEM specifications.

The bearing located between the impeller and stator was found to be defective. When the bearing was rotated by hand, a roughness could be felt, and when the bearing was taken apart, spalling could be seen. The bearing appeared to have been replaced during the recent overhaul, and the mating surfaces to the bearing also appeared to be prepared properly. The surfaces at the stator and impeller were both machined flat and were perpendicular to the center line of the converter. The only clue the converter rebuilder noticed was an uneven pattern on the tanged washer (spacer) located between the bearing and the impeller. During the recent rebuild the surface on the impeller where the bearing rides was prepared correctly, but the grooves that retain the washers tangs (keeping the washer from rotating) were not deepened to the level of the newly machined surface. The tangs of the washer bottomed in the grooves and never allowed the washer to come into contact with the machined surface of the impeller (see Figures 1 and 2).
This two-point contact allowed the washer to deflect, giving it the uneven wear pattern and causing the bearing to fail. When the bearing is supported by an uneven surface, the load that the bearing is carrying is not distributed evenly to the load-bearing elements of the bearing. When the grooves were machined to the proper depth, both the overall height and the endplay of the converter had to be adjusted. 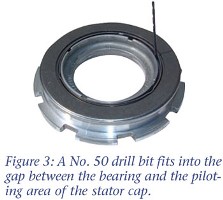 The second converter was an early-model 4L80-E. The converter had been replaced when the transmission was rebuilt about one year prior to the current noise problem. The technician diagnosed the noise problem much like that of the first converter and came to the same conclusion. The converter was removed from the vehicle and cut apart, and as before, the bearing between the impeller and stator was found to be defective. The overall height and endplay of the converter checked to OEM specifications. The bearing appeared to have been replaced at the time of the recent rebuild and both mating surfaces appeared to be in good condition. The rebuilder commented that the thrust surface of the stator cap – which usually shows signs of wear and is routinely replaced – showed very little wear and was reused. When the bearing was placed on the stator cap, the problem became obvious.
Although the thrust surface of the stator cap was in good condition, the surface that the bearing pilots on showed almost .070” wear (see Figure 3). This wear would allow the bearing to run almost .035” off of center. Running off center causes uneven loading of the bearing and premature bearing failure.

The third converter was an early model (Aisin manufactured) Allison 1000 converter. The noise problem was the same as in the first two converters. It was diagnosed in the same manner and the same bearing was found to be defective. The overall height and endplay also checked to OEM specifications on this converter. The reason for the bearing failure was much like that of the second converter. The mating thrust surfaces were fine, but the piloting surface was out of specifications.
Figures 4 and 5 show how the wear to the piloting areas look. What appears to be snap ring grooves are the actual wear areas. The wear to the stator cap on the turbine side of the stator and the wear to the stator on the impeller side are almost equal, but the bearing on the impeller side failed first, because it carries more load. The reason for this wear is twofold: First, the races are separate from the bearings and are free to rotate on the stator and stator cap, and second, the I.D. and O.D. of the races are not machined surfaces. The magnified picture in Figure 6 shows this area. The uneven surface is why the wear is so extreme. This bearing problem went away in model year 2006 when the bearings were redesigned as fully enclosed bearings instead of a bearing and separate race.

Moral of these Stories

Needle thrust bearings are a key component of a torque converter. Their ability to carry high loads and operate at high speeds makes them the better choice over thrust bushings or thrust washers. When a needle bearing is installed and maintained properly, it will give many years or miles of faithful service.
Special thanks to Sonnax engineer Mike Morin for his help with this article.
Ed Lee is a Sonnax Technical Specialist who writes on issues of interest to torque converter rebuilders. Sonnax supports the Torque Converter Rebuilders Association.