Since the release of the Allison 1000/2000/2400 series transmission, four basic torque converter configurations have been used. TC-210, TC-211, TC-221 and TC-222 can be found in Group 21 of the Allison Parts Book, and these four converters all have different stall torque ratios and “K” factors. Over the years there have been several revisions made to the torque converter ssembly process for all four converters, and each time a change was made, a new part number was assigned. None of these changes had an effect on the performance or functionality of the torque converter. Different generations of each of the four converters are completely interchangeable with other generations of the same type.
The first four generations of torque converters were built by one manufacturer, and this continued through the end of the 2005 model year. Another company took over production of the Allison series converters at the beginning of the 2006 model year, and issued new part numbers for the fifth generation of converters. Figure 1 shows a complete listing of all part numbers to date, from the first through fifth generation.
Figure 1
The part numbers can be found on the bar code labels located on the cover of the converter next to the mounting pads (see Figure 2), and are also color coded (see Figure 1).
When the fifth generation of these converters went into production, their exterior appearance changed. The pilot and mounting lugs became huskier and the cover profile was shaped differently (see Figure 3). The mounting pads were a very welcome change because of numerous leak issues associated with pads in the previous design.
There are two different impellers (pumps) and three different stators used in the 1000/2000/2400 converters. By combining these different impellers and stators, it is possible to achieve the four different stall torque ratios and “K” factors. It is difficult to see a difference in the impeller blade angle from the exterior of the converter. It is not a lot easier to see the difference from the inside, but there is a secondary way to identify the lower stall impeller. The No. 981 impeller has a rib that runs down the center of the blade (also called “fins”). The higher stall No. 980 impeller does not have a rib on the blade. The No. 981 impeller (with the rib) is found in the TC-221 and TC-222 converters (see Figure 4). With the lower stall and huskier blades, it is safe to assume these converters were designed for use with diesel engines.
The stators are equally difficult to identify. All three stators have 20 vanes, and the only visible difference (except for the casting numbers) is the window opening of the vanes. The stator with the casting No. 962 is used with the TC-222 converter and produces the lowest stall and “K” factor. The stator with the casting No. 979 is used with both the TC-211 and TC-221 converters (see Figure 5), and has a slightly higher stall. The stator with casting No. 978 is used with the TC 210 converter and has the highest stall of the three stators. 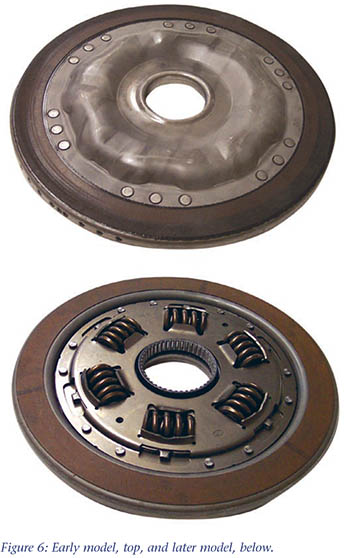 The impellers and stators determine the stall torque ratios and “K” factors of the converters. Some identification issues may occur because the I.D. part numbers for these converters are located on the covers of the converters. Since these parts may have been separated at the time of rebuild, special care must be taken for proper usage after the rebuild process.
Throughout the production of the 1000/2000/2400 converters, all of the TCC clutches used in the four converters have been rated at 895 NM (Newton/Meters). You can identify the different clutch manufacturer by the arts’ appearance. The newer clutches have an open damper spring design, while the damper springs are not visible on the earlier clutch (see Figure 6). Both clutches will interchange with any converter of like manufacture, but will not interchange across manufacturer lines because of cover profile and turbine hub differences.
The TC-210 is used with the gas engines, and the TC-221 and TC-222 are used with diesel engines. The part numbers that have been verified through the 2004 model year have the TC-211 being used with the Dura-max diesel engines, but with the TC-211’s stall torque ratio and K factor, it would not be a surprise to see it in a gas application.
Special thanks to Tim Prugh at CVC, Mark Gruelich with Jasper Engines & Transmissions, and Don Randolph with Dacco.​​​​​​​
Ed Lee is a Sonnax Technical Specialist who writes on issues of interest to torque converter rebuilders. Sonnax supports the Torque Converter Rebuilders Association.

Allison® 1000 Converter – Identifying After the Rebuild