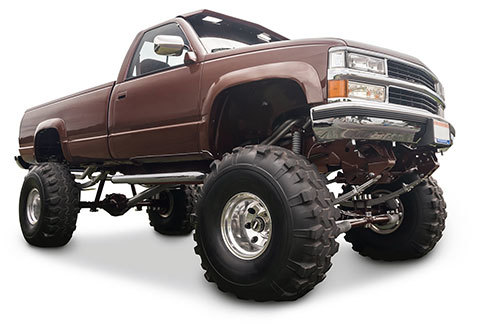 alling bigger tires on trucks is about as American as baseball, country music and apple pie. Unfortunately, big tires also go hand-in-hand with something less enjoyable: transmission failure. You can guard against problems and better troubleshoot chronic failures by knowing the unintended consequences of oversized tires on the tranny, especially the role gear ratios play in managing torque as it travels through the drivetrain.

While big tires are a popular vehicle mod found throughout the United States, some would argue that this trend was actually inspired by the work of a French engineer in the early 20th century. Adolphe Kegresse installed an off-road track system onto various Rolls-Royce cars and Packard trucks and later developed it for use in World War II when vehicles needed to reach remote locations. After the war, private contractors and companies started utilizing the concept of adding more ground clearance to access remote parts of the country with their vehicles. The difference in their method was that they modified the suspension to raise the vehicle and put on larger diameter tires. This was mostly done to large commercial work trucks at this time.

Fast forward to the 1970’s, and you’ll find this is when the lifted big tire craze took off. “Bigfoot,” arguably the first monster truck, was created by Bob Chandler during this time period. Once monster truck events were televised and the trend caught on, regular folks wanted to replicate this cool look and explore areas they could not access with stock tires. To accommodate larger tires, companies started making lift kits, and automotive manufacturers began offering special, off-road versions of their popular pickups. The tough look of big knobby tires and the ability to go where others can’t did come with some downfalls, however. Now that we know how the trend started, let’s look at some of the negative aspects of oversized tires.

Upgrading to larger outer diameter tires naturally increases the circumference, the distance around the outside of the tire. The circumference is used to calculate your speed, so any deviation from the factory tire size will affect this. This problem is minimal in newer vehicles that use an electronic speed sensor and can be corrected with programmable tuners. In older vehicles that rely on a cable- and gear-driven speedometer, though, adapters, calibration boxes or speedometer gear changes are necessary.

The biggest issue with installing taller tires is the increased strain on the drivetrain. To get a better look at this consequence, we can go back to physics class — I’ll even give you some homework. For this example, we will use this torque formula: 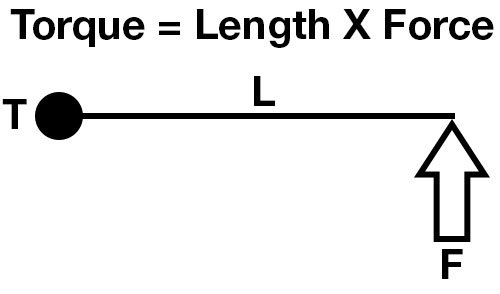 Increasing the length (L) of the lever arm increases the torque (T) applied. This theory is put to test every time you reach for a longer breaker bar for that stubborn, rusted bolt.

This theory works against you, however, when you increase the radius of a tire, because it now requires more torque from your driveline to turn that larger tire. This generally does not have much of a negative effect on the engine components themselves, although it will now require the engine to work harder to maintain the same speed as before. The transmission components, on the other hand, especially the clutches and bands, take the brunt of the abuse. Clutches and bands will begin to create excessive heat as they struggle to operate under higher constant stress. Excessive heat cycles will cause the friction surfaces to start slipping, and at that point the transmission will need to be overhauled. If the core problem of the failure is not addressed — increased tire size — problems will occur again and again.

So how do you safely run those big, 35” tires on a vehicle that didn’t come stock with them?

The pinion gear has significantly less teeth and will rotate more than the ring gear. Gear ratios will be labeled as 3.42:1, or 3.42 revolutions of the pinion and driveshaft for one revolution of the axle shaft. If you were to order a new truck, you could request from a small selection of available gear ratios. These gear ratios are calculated by engineers to maximize torque, acceleration, engine RPM at highway speeds and ultimately gas mileage, all while taking into account the known tire diameter. These gear sets can be changed out by professionals for either different aftermarket or original equipment gear sets. Modifying the final gear ratio will correct the drivetrain deficiencies caused by larger tires. Obviously it is more expensive and difficult to modify a 4WD drive gear ratio than RWD because there are two sets to change.
To find your new optimal gear ratio, you can use this formula:

Now that we have restored the vehicle’s driving characteristics and power, it’s time to get out and enjoy the outdoors safely and responsibly. A very popular hobby called Overlanding is gaining popularity where people outfit their trucks and SUV’s with tents, beds, cooking implements and other amenities and drive on unimproved roads out in the country. Of course there will also always be the 4WD trucks fitted with 35” tires that never once see a dirt road. Those vehicles especially need re-gearing because of how often they are driven at highway speeds.