Ford Motor Company introduced the 6R140 transmission, paired with the 6.7L diesel, in early 2010 for the 2011 model year production. This has created confusion when trying to identify valve body components, as new model year release is usually near the end of the previous year. Valve body and separator plates have gone through numerous updates since the beginning of 6R140 production. This article will illustrate changes, function and interchangeability.

First generation of castings (’11–’14 model year) have a 10 through 13 casting year on valve body. The rough forging number for the first production valve body castings end with “EB.”

The first production separator plates have no notches for external identification, but do have the engineering part number stamped on them of BC3P-7Z490-EB, -EC, -ED or -EE, which is visible externally.

The first production valve body assemblies had one change made to them in ’13–’14. A damper location was cast in the lower valve body, but not originally finished to accept a damper piston. This changed in ’13–’14 when the valve body casting was machined to accept a third dampener piston assembly that is used in the “D” Low/Reverse solenoid output circuit. The separator plate was also changed to provide a feed hole to this piston and is identified with engineering stamping BC3P-7Z490-EE.

In 2015 model year production (14-later casting number), the valve body went through major worm track configuration changes. The rough forging casting numbers end in “BA” and are used all the way up through 2019. Based on the hundreds of core samples, there are four separator plates that have been identified to fit “BA” castings, that are distinguished by a “C,” “CC,” “V” or “VV” notch in the plate. The following are changes in plate and valve body combinations:

This passage feeds converter-out oil to lube until the thermostat opens at approximately 195°F. The converter limit valve works in conjunction with this feed to control how much converter-out oil is fed to lube. Most units have a large triangle-shaped feed, but some later plates have a smaller, round feed (Figure 1). In ’17-later diesel applications, this passage isn’t functional since Ford moved the thermostat outside the valve body, mounting it to the transmission cooler. The thermostat is replaced by a plug in the valve body in ’17-later diesel applications.

This only applies to early (10–13) casting numbers, ’11–’14 model year, which use plates with no notches. A technician can put a three-dampener plate and casting in place of a two-dampener system.

On the “V” plate only, Ford feeds certain shift valves directly from pressure regulator valve versus going through manual valve.

Only plates with no ID notches will fit on early castings, ’11–’14 model year (10–13 casting year). Early castings have casting numbers ending in “EB.” A technician just needs to pay attention to whether it’s a two-dampener or three-dampener setup.

Only notched plates can be used with ’15-later model year (’14-later casting year). These casting numbers end in “BA.” The builder still needs to pay attention to all the differences between “C,” “CC,” “V” and “VV” plates.

We believe Ford is using ’14-later casting numbers with correct plate combination to service earlier transmissions, but more ID work needs to be done. Refer to chart for plate variations.

Various models use different plates. Be sure to consult the Ford dealer with VIN number to correct plate part number. 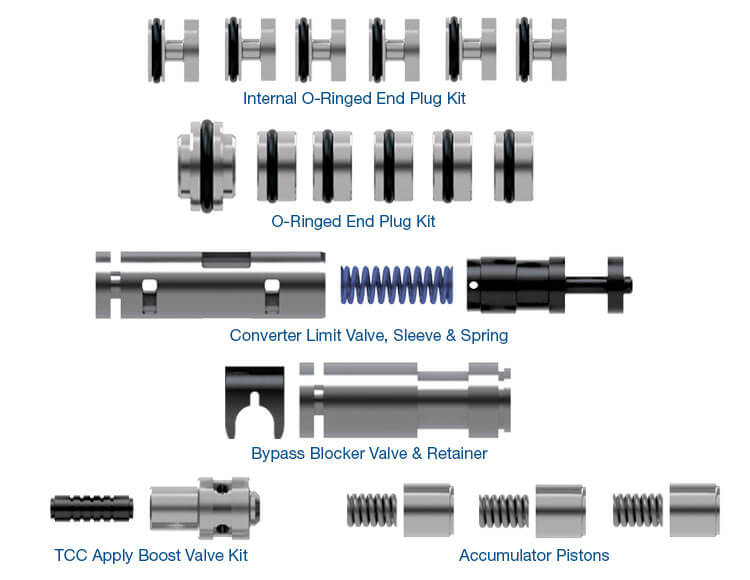